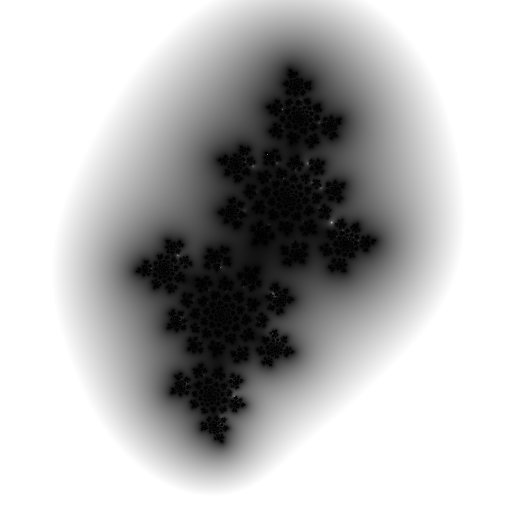 A Julia fractal. Note the smooth, anti-aliased rendering. The color is picked as function of the estimated function to the Julia boundary.

Pyglet is a very good Python module, wrapping OpenGL and providing access to mouse and keyboards events. The API is really easy to learn, well-documented, with that "clean & lean" feel to it. I started to use Pyglet for work, and I positively love it.

So, Pyglet, allows you to summon the power of your graphic card using Python. And those days, even a puny low-end graphic card packs a lot of power : GPU, massively parallel computing. Although it's been around for years now, I never bothered tinkering with GPU, lack of time, other interests. Now that I feel comfortable with OpenGL, Python and Pyglet, however, harnessing this GPU goodness require very little effort. With years of delay, let's jump in that band-wagon already !

For a first try, I went for the done, done again, and overdone : fractals. More precisely, Julia fractals. You can see this fractal as function to iterate for each pixel of a picture, that takes as input the coordinate of the pixel.

is a complex variable, with

being the coordinate of the pixel in the complex plane, and

a complex constant. This function is iterated until

or a maximum count of iterations is reached. You then color the pixel depending on the number of iterations spent. Consider visiting the Wikipedia page about Julia fractals, there is a lot to learn about it there.

And you get a nice picture, a fractal. What happen if you play with the parameter

? The Julia fractal is fairly intensive to compute, rendering it in real-time requires some significant engineering... or a GPU, as the computations for each pixel are completely parallel. So what I did is to render the Julia fractal as a fragment shader, and control the

parameter with the mouse. The code for this turns out to be dead simple, assuming you are familiar with the OpenGL API

This code create a window, and display a quad polygon that fills the window. The texture for the quad is a procedural one, computed by a shader. Here, I use a neat utility class that encapsulate OpenGL API for the shaders : shader.py, by Tristam MacDonald. The

parameter of the fractal  is controlled by the mouse position in the window.

Of course, most of the magic happens inside the shaders. The vertex shader,   julia.v.glsl, is not exactly rocket science.

All the actual job is done in the fragment shader, julia.f.glsl. Basically, I count how much iterations are required to have

, and use this to pick a color.

can be controlled from outside the shader, as uniforn variable. For sake of simplicity, I hard-coded the color scheme. One nice improvement would be to pick the color from a 1D texture, itself procedurally generated.

Note that here I use a variant on the classical Julia : I render a distance to the boundary of the fractal, the trick being from the amazing Inigo Quilez. It gives me anti-aliasing at a much cheaper cost than super-sampling. A few minutes of coding, and I got that instant enlightenment, with a feeling of achievement on the top of it. Those GPU are indeed great little pieces of silicon !

Matplotlib, what is that ? It is a software package to make plots, yet another one... but a really good one. Since Matplotlib is a Python module, plots are described in Python, rather than a (usually clumsy) custom language. So a script using Matplotlib can harness the full power of Python and its nice modules like Numpy. Say, reading compressed data file, doing some fancy statistics, etc. Moreover, Matplotlib is rather complete, providing a wide diversity of plots and render targets such as PNG, PDF, EPS. Finally, the quality of the plots is up to the standard of scientific publication. Originally a Gnuplot user, it's been a couple of years with Matplotlib and me, and I am very happy with it. Perfect ? Well, documentation for Matplotlib is a little bit scattered. I'm working on a tutorial, a Sisyphus-grade task... Rather than waiting for completing that looooong tutorial, a short recipe today !

Only one Matplotlib back-end seems to support multiple pages, the PDF back-end. We have to explicitly instantiate that back-end and tells it that we want to go multiple pages. Here's how it's done

Now, for each new page we want to create, we have to create a new Figure instance. It's simple, one page, one figure. We want a A4 format, so we can eventually print our nice document, for instance. That's not too hard, we have just to specify the proper dimensions and resolutions when creating a Figure. Once we are done with a page, we have to explicitly tell it to the back-end. In this example, the script creates 3 pages.

One A4 page is a lot of space, we can squeeze a lot of plots in one single figure. Recent Matplotlib versions (1.x.x and later) have now a nice feature to easily layout plots on one figure : grid layout. 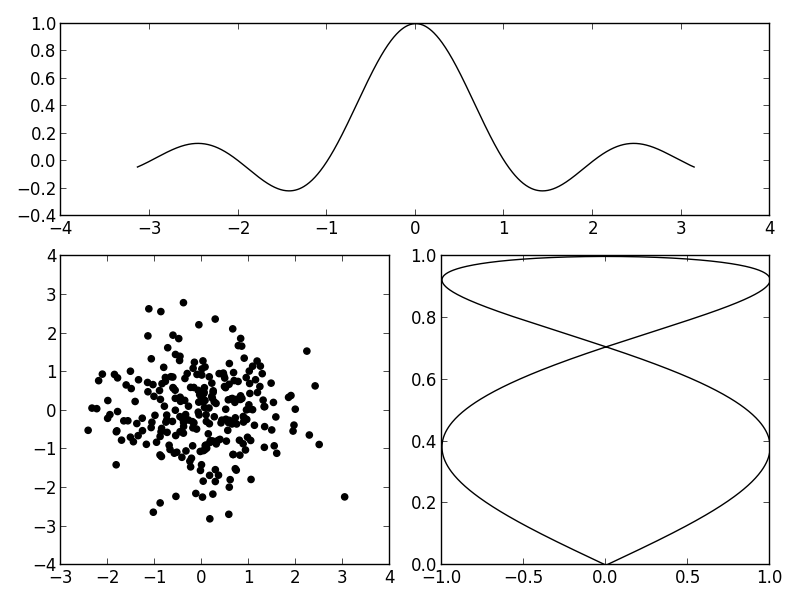 Note the tight_layout call, which pack all the plots within a figure automatically, and does a nice job at it. But it is in Matplotlib 1.1.x only... With Matplotlib 1.0.x I don't know yet how to do it. Why bothering ? Because say, at work, you might have to deal with Linux distributions are providing rather outdated versions of software in their official packages repositories, and even the unofficial ones are lagging. Yes, CentOS, I'm looking at you !

Now, we can combine subplot2grid with the multiple page trick, and get multiple pages PDF documents which look good. 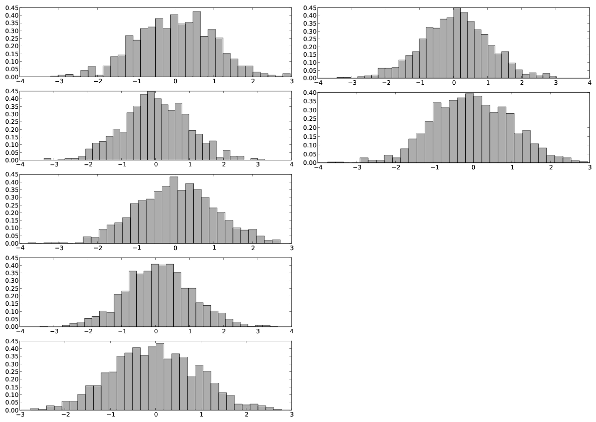 A preview of the PDF document you should get from the example. Do not mind the ugly antialiasing, it's me who fumbled with the PDF to PNG conversion.

As you can see, a little bit of arithmetic is used to have the proper number of pages and create them at the right moment. It's a minimal example, but by now, you got the recipe.